The student will gain knowledge of the emergence of social media networks such as Twitter, Facebook, Tik Tok, and YouTube as delivery methods for various types of WMDD. (Figure 20.1) By highlighting the ubiquitous availability and acceptance of these networks globally, they serve as uniquely effective methods of delivering information globally and instantly. They are capable of causing mass casualties or death by seeding panic, false narratives, or even serving as a messaging or command and control tool for combatants, terrorists, or other NGO actors globally.

SOCIAL MEDIA NETWORKS AS A WEAPON OF MASS DESTRUCTION, DISTRACTION, AND DIVISION

In 1980, famed Holocaust survivor and Nazi hunter Simon Wiesenthal was asked by a college student if the Holocaust could happen again. Wiesenthal responded; “If the technology available to Adolf Hitler had been available in 1492, no Jew would have survived in Spain, no Catholic in England, and no Protestant in France.” (Heir, 2019) Although Hitler had no shortage of apologists in the Western media, such as the New York Times, radio was still limited in its reach, and television was in its formative years. (Frankel, 2001) The concept of the instant digital transmission of information globally was primarily a concept reserved for those who wore tinfoil hats. 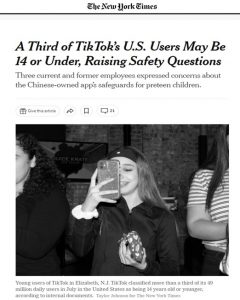 In a 2015 article, “Are We Experiencing a Digital Spring?” this author examines how social media help fuel the Arab Spring. (Lonstein, Are We Experiencing a Digital Spring? 2015) The governments of Tunisia, Egypt, Libya, and Yemen fell with never-before-seen speed, in part helped by the instant viral spread of social media videos and posts. The power of social media and streaming was far greater than the viral spread of a populist movement may well have been far more nuanced than initially thought.

In 2017, Jon Herrmann wrote an article entitled “Nine Links in the Chain: The Weaponized Narrative, Sun Tzu, and the Essence of War.” Herrmann examines how weaponized narratives disseminate. He wrote; “a narrative can now deploy in a rapid-fire series of mutually reinforcing stories that are hard for people to disregard and reach a global audience in seconds at a minimal cost.” (Hermann, 2017)

In 2016, the Chinese technology company Byte Dance launched the social media app Tik Tok. The platform formally took hold in 2018, going from obscurity to 2.5 billion installs in just three years with a projected social media user’s market share of over 20% by 2024, trailing only the Meta-owned Facebook and Instagram in popularity worldwide. While many have been strongly critical of the content moderation and de-platforming activities of the US-based social media companies, one crucial difference exists between those companies and Tik Tok: state control of or access to user data. While that may insignificant, a careful examination of its Privacy Policy reads: “We may collect biometric identifiers and biometric information as defined under U.S. laws, such as faceprints and voiceprints, from your User Content. Where required by law, we will seek any required permissions from you before any such collection.” (Perez, 2021) 2021)

According to Bryan Cunningham, Executive Director of the Cybersecurity Policy Research Institute at U.C. Irvine, “If the legal authorities in China or their parent company demand the data, users have already given them the legal right to turn it over.” William Evanina, former Director of the National Counterintelligence and Security Center, warned, “When you are going to download Tik Tok … and you click on that ‘I agree to terms’ — what is in that is critical” (Rodriguez, 2021)

In the age of deep fakes, A.I., machine learning, and all those technologies encompass, all of the users of Tik Tok, no matter their age or nationality, may have already provided the Rosetta stone of information to the hostile governments, terrorist, or their proxies.

Students must be aware of the risks social media can present as a tool of information mining, information warfare, and live, global command and control; they should consider that it can in and of itself be considered a Weapon of Mass Destruction. During the COVID-19 Pandemic, Carnegie Mellon University studied over 200 million tweets discussing the pandemic. The findings were proof positive of how Social Media is a force multiplier when it comes to information warfare. “Of the top 50 influential re-tweeters, 82% are bots, they found. Of the top 1,000 re-tweeters, 62% are bots.” (Young, 2020) Some like Sarah Jacobs Gamberini believe that Social Media can also serve as a Bioweapon, especially during a time such as the current pandemic. “Russia’s present leaders fear that U.S. advantages in information technology allow Washington and its allies to undermine Russian social, cultural, and political institutions as part of its broader campaign to ensure Western geopolitical dominance. The Kremlin sees information as a new type of weapon and views all forms of information, across all platforms, as potential sources of power to be weaponized.” (Gamberini, 2020) Bots on social media platforms have been documented to help amplify division and misinformation, especially when there is a heated debate, in this case, vaccinations. (Broniatowski, 2018)

Consumer technology risk does not end with information harvesting. It extends to another vector of delivery for weaponized narratives. In 2016, Zhu Ling, editor-in-chief of China Daily, said: “We have always attached great importance to ‘borrowing a mouth to speak’ and used international friends to carry out foreign propaganda.” (Australian Strategic Policy Institute, 2021)

Considering China’s ability to acquire such a broad swath of users’ biometric and personal data and its potential weaponization, it takes little imagination to conclude that Tik Tok presents a clear and present danger to people worldwide. Just imagine multiple “A.I.” generated deep fake accounts of influencers spreading propaganda or worse to the fifty million daily users of Tik Tok in the United States and one billion users monthly across the globe? The prospect of mining the images and biometric information of children using social media apps without understanding the consequence of their actions or the legal ability to sign a binding contract is even more troubling. Imagine a Tik Tok or V.K. user becoming the Prime Minister of the United Kingdom. Upon assuming office, a hostile nation attempts to blackmail or extort them based upon biometric, or other personal information mined years before. The risk does not end with social media. SZ DJI Technology Co., the world’s largest producer of unmanned aerial vehicles, has been in the cross-hairs of many Western national security agencies for years. The primary concern is that DJI drones are in the hands of consumers, and companies are serving as passive listening and information harvesting tools for the Chinese military-industrial juggernaut. (Figure 20.2) According to FCC Commissioner Brendan Carr, DJI drones “vast amounts of sensitive data,” and Carr warned DJI might be a “Huawei on Wings” in an FCC statement. (Commission, 2021) 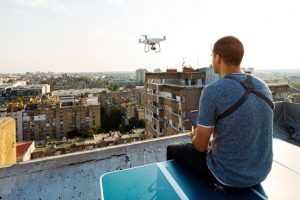 In June of 2021, a “leaked” report summary from The Hill claimed that the “Pentagon report clears use of drones made by top Chinese Manufacturer.” (Rodrigo, 2021) Whether a trial balloon or mistake, The Hill report resulted in a strong response from the Department of Defense in July 2021 which issued a statement countering conflicting information being “not approved for release by the DOD. (Defense, 2021)

Unfortunately, governmental prohibitions on DJI products and investment in the company do little to address the risk posed by DJI products in consumer markets. It is not a giant leap to see how consumer technology has become a tool of terror and war. In a recent report in FT, Marine Corps General Frank McKenzie identified the risk by calling these products “Costco Drones” the new “IED Movement.” (Manson, 2022)

The 2022 Russian invasion of Ukraine is an ongoing conflict as of the writing of this text. Numerous accounts about the highly effective use of weaponized consumer drones have surfaced, and their effect on the Russian troops appears to be significant. (Figure 20.3) Consumer drones with infrared cameras locate Russian troops, and modified drones deliver explosive payloads. (Hambling, 2022) According to the website dronedj.com “A local U.A. company developing a way to drop payloads onto Russian vehicles simply from COTS drones; here an F-1 grenade is dropped from a DJI Phantom 4 onto a car from 100m,” @CalibreObscura’s tweet reads. “Note that this is civilians developing this for defense, not the Ukrainian Army.” (Crumley, 2022) 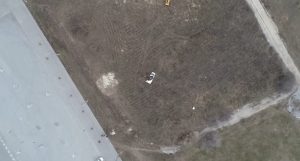 Over the last decade, the emerging technologies of live streaming social media and drones have been the source of many improvements to the day-to-day lives of billions of people globally. While the positives have primarily outweighed the negatives, a concern exists that the marriage of the two technologies can provide bad actors with a command-and-control capability never before available. Students must remain mindful of the rapidly emerging threats posed by consumer products. Whether it is mining information for children or unsuspecting users of social media apps, or information obtained from connected technology used in our daily lives, the prospect of misuse of this information remains significant.

The risks posed by exploiting social media platforms go far beyond misinformation, unrest, and recruitment. Consumer technology such as drones can be coupled with social media to allow for the remote operation of UAVs from anywhere in the world. FPV technology is a game-changer. “FPV stands for first-person view. So, when it comes to flying an FPV drone, pilots of FPV drones see what the drone sees. Traditional drones differ from this as they are piloted through the pilot’s perspective on the ground. With FPV, it is instead piloted through the drone’s perspective, not the pilot, via an onboard camera. (Figure 20.4) A drone’s eye view, if you will.” (Dean, 2021) 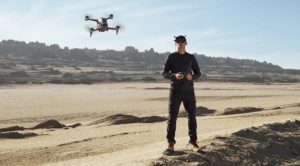 FPV drones have become wildly popular. Their target market is the hobbyist or drone racing consumer. It was not a giant leap to see how using FPV drones could be an effective tool of warfare where the operator can remotely operate the drone through remote virtual display goggles for missions of up to 7.5 kilometers or more with modification.

Such inexpensive and effective technology is not lost on NGOs and Terror groups when waging asymmetric warfare. The Islamic State took advantage of inexpensive consumer drones in Iraq and Syria, easily modified to carry and deliver ordnance to attack United States forces. “They used them when we were closing in on Mosul,” Lt. Gen. Mark Nowland, deputy chief of staff for operations for the Air Force, told a small group of reporters following Thursday’s event. “There were some operations where they dropped a grenade essentially, so it was essentially a piece of artillery that was falling on some forces.” (Pomerleau, 2018)

Students should consider what happens when inexpensive consumer technology and social media live streaming meet? This prospect is no longer a hypothetical exercise; instead, it is a troubling reality. Imagine the propaganda value of a terror group live-streaming an attack or nation-state combatants’ live streaming combat drone activities to propagandize a narrative about the success of operations. The troubling marriage of technology, social media live to stream, and warfare is a new reality that may confront students sooner than they think. Add to that the private ownership of Social Media or, in the case of nations such as China, direct control over platforms such as Tik Tok, and the issue of access or bandwidth could become a deciding factor on the information warfare narrative battlefield.

QUESTIONS FOR STUDENTS TO CONSIDER

Hambling, D. (2022, March 8). How Small Drones Could Win The Fight In Ukraine’s Cities (And The Truth About That Anti-Drone Pickle Jar Story). Retrieved from Forbes: https://www.forbes.com/sites/davidhambling/2022/03/08/how-small-drones-could-win-the-fight-in-ukraines-cities-and-the-truth-about-that-anti-drone-pickle-jar-story/?sh=2b6ee625641e

Hermann, J. (2017, July 27). Nine Links in the Chain: The Weaponized Narrative, Sun Tzu, and the Essence of War. Retrieved from The Strategy Bridge: https://thestrategybridge.org/the-bridge/2017/7/27/nine-links-in-the-chain-the-weaponized-narrative-sun-tzu-and-the-essence-of-war

Lonstein, W. (2015, September 8). Are We Experiencing a Digital Spring? Retrieved from LinkedIn: https://www.linkedin.com/pulse/we-experiencing-digital-spring-wayne-lonstein/

Rodrigo, C. M. (2021, June 1). Pentagon report clears use of drones made by the top Chinese manufacturer. Retrieved from The Hill: https://thehill.com/policy/defense/556370-pentagon-report-clears-use-of-drones-made-by-top-chinese-manufacturer?rl=1

Young, V. A. (2020, May 27). Nearly half of the Twitter Accounts Discussing ‘Reopening America’ May Be Bots. Retrieved from Carnegie Mellon University: https://www.cmu.edu/news/stories/archives/2020/may/twitter-bot-campaign.html

DRONE DELIVERY OF CBNRECy – DEW WEAPONS Emerging Threats of Mini-Weapons of Mass Destruction and Disruption ( WMDD) by Randall K. Nichols is licensed under a Creative Commons Attribution-NonCommercial-ShareAlike 4.0 International License, except where otherwise noted.