Randall K. Nichols is Professor of Practice in Unmanned Aircraft Systems (UAS) – Cybersecurity at Kansas State University Polytechnic (KSUP) in Salina, Kansas. Nichols serves as Director, graduate UAS- Cybersecurity Certificate program at KSUP. Nichols is internationally respected, with 50 years of experience in leadership roles in cryptography, counterintelligence, INFOSEC, and sensitive computer applications. Throughout his career, Nichols has published nine best-selling textbooks. Nichols has provided counsel to the United States government and is certified as a federal subject matter expert (SME) in both cryptography and computer forensics. His most recent work involves creating master and certificate graduate – level programs for KSU and Utica College. To wit:

Nichols served as CEO of COMSEC Solutions, a Cryptographic / Anti-virus / Biometrics Countermeasures Company, which was acquired by a public company in 2000. He served as Vice President of Cryptography and Director of Research of the acquiring firm.

Nichols served as Technology Director of Cryptography and Biometrics for the International Computer Security Association (ICSA), President, and Vice President of the American Cryptogram Association (ACA).

*Direct all inquiries about this book to Prof. Randall K. Nichols at profrknichols@ksu.edu

Dr. Hans C. Mumm holds a Doctor of Management with a concentration in Homeland Security from Colorado Technical University (CTU) and an MS in Strategic Intelligence from American Military University (AMU).  He gained notoriety during Operation Iraqi Freedom as the officer in charge of the “Iraqi Regime Playing Cards; CENTCOM’S Top 55 Most Wanted List” which was touted by the Defense Intelligence Agency (DIA) as one the most successful Information Operations (IO) in the history of Defense Intelligence Agency (DIA). Dr. Mumm is the former Division Chief for Cyber Security at the Office of The Director of National Intelligence (ODNI) programming and executing a budget of over $140 M. Dr. Mumm has earned twenty-three personal military ribbons/medals including six military unit medals/citations, and two Directors Awards, from the DIA. In 2016 he was awarded the People of Distinction Humanitarian Award as well as being granted a US Patent and Trademark for How to Harmonize the Speed of Innovation and Change with the Human Spirit’s Need for Leadership. In 2005, Dr. Mumm was recognized as one of the “Ten Outstanding Young Americans,” and in 2003 he was awarded the National Defense PAC “American Patriot Ingenuity Award” for his service during “Operation Iraqi Freedom.”

He is a published researcher in both the scientific and social science arenas and has won grants and contracts to further test and evaluate his original research. He has notable experience in research and systems engineering which includes contracts for UAV research and the creation of an advanced multiple fuel system which operated the world’s first and only helicopter that can fly on five separate fuels without engine modifications. His research extends into emerging and disruptive technology for offensive and defensive missions supporting US and coalition operations. His UAV and robotics expertise has focused on determining the specific uses, exceptions, and allowances for robotics operations; including studying the unintended consequences, future use, and misuse of such technologies. Dr. Mumm’s presentations and publications support his research into autonomous systems in the virtual and physical worlds. Additionally, he serves as an adjunct professor at California University of Pennsylvania (CALU) instructing Homeland Security courses in the Criminal Justice Department.

Wayne Lonstein holds a Bachelor of Arts Degree in Political Science from Wilkes University, a Bachelor of Science Degree in Cyber Forensics and Information Security from Syracuse University – Utica Collage, A Master of Science Degree in Homeland Security with a concentration in Information Security from The Pennsylvania State University and a Juris Doctor Degree from Pace University School of Law. Additionally he holds a CISSP Certification from The Pennsylvania State University. He is a member of the state bars of New York, New Jersey, Massachusetts an Pennsylvania as well as being admitted to over 30 United States District Court Bars, The Court of Veterans Appeals, United States Tax Court and the bar of the United States Court of Appeals of the 2nd, 3rd and 5th Circuits.

In addition Mr. Lonstein has practiced law nationally since 1987 in the area of technology, intellectual property, sports and entertainment and has litigated over 2000 cases. He is also a member of the New York State Magistrates Association and has served as a Magistrate Judge in the Town of Wawarsing, New York since 1989.

He a member of Signal law PC, the Co- Founder and CEO VFT Solutions is a member of the Forbes Technology Council and has authored numerous articles including: “Why Industry and Government Leaders Need to Realize Vulnerabilities of the Cloud”

Julie J.C.H. Ryan, D.Sc., is the CEO of Wyndrose Technical Group, having retired from academia in 2017.  Her last position in academia was Professor of Cybersecurity and Information Assurance from the U.S. National Defense University.  Prior to that, she was tenured faculty at the George Washington University and a visiting scholar at the National Institute for Standards and Technology (NIST).

Dr. Ryan came to academia from a career in industry that began when she completed military service.  Upon graduating from the U.S. Air Force Academy, Dr. Ryan served as a Signals Intelligence Officer in the Air Force, and then as a Military Intelligence Officer with the Defense Intelligence Agency.  Upon leaving government service, she worked in a variety of positions, including systems engineer, consultant, and senior staff scientist with companies including Sterling Software, Booz Allen & Hamilton, Welkin Associates, and TRW/ESL supporting a variety of projects and clients.

She is the author /co-author of several books, including Defending Your Digital Assets Against Hackers, Crackers, Spies, and Thieves (McGraw Hill 2000), and a Fellow of the American Academy of Forensic Sciences (AAFS).  At Wyndrose Technical Group, she focuses on futures forecasting and strategic planning with an eye on technology surprise and disruption.

Ms. Candice Carter is a  cybersecurity expert with over 15 years of hands-on experience in the areas of counter-terrorism, counterintelligence and criminal cyber investigations. She conducts Classified/Unclassified briefings in the areas of Terrorism Cyber Capabilities using Social Media and Counter-terrorism for the Intelligence Community (IC). Ms. Carter conducts research and constructs Asymmetric Warfare and Attack / Defense Scenarios against National Critical Infrastructure. She is the Team Lead and for NASA Aeronautics Research Institute for Transformative Vertical Flight (TVF) Commercial Intra-City On-Demand VTOL group. Ms. Carter is an invited speaker for key organizations including BSides London and (ISC)2 Security Congress. She is an Assistant Professor/Chair MSc Cybersecurity program at the Wilmington University. Ms. Carter  holds a MSc Cybersecurity Forensics and Intelligence from Utica College, Utica , NY and a PMT Cybersecurity UAS (expected 2019) from Kansas State University.

Aris has 30+ years of IT experience and earned a BS in Cybersecurity from Utica College, Utica, NY while working full time.  He has provided editing skills for Professor Nichols for 10 years now. His approach is all encompassing, as opposed to strict grammar rules. Reading ease, topic flow, clarity, and being succinct are the focus.

Dr. Barnhart’s Research agenda is focused in aviation psychology and Human Factors as well as the integration of Unmanned Aircraft Systems into the National Airspace System.  His industry experience includes work as a R&D inspector with Rolls Royce Engine Company where he worked on the RQ-4 Unmanned Reconnaissance Aircraft development program, as well as serving as an aircraft systems instructor for American Trans-Air airlines. Formerly, Dr. Barnhart was an Associate Professor and Acting Department Chair of the Aerospace Technology at Indiana State University where he was responsible for teaching flight and upper division administrative classes.   Courses taught include Aviation Risk Analysis, Citation II Ground School, King Air 200 Flight, Air Navigation, Air Transportation, Instrument Ground School and many others.

CPT John-Paul Hood is a researcher focused on the development of future counter unmanned aircraft technologies, theories and best practices for both government and civilian applications. CPT Hood has commanded in the US Army Field Artillery with a background specializing in the coordination and delivery of conventional / smart munitions as well as achieving desired battlefield effects through the integration of lethal and non-lethal assets. CPT Hood holds a BS in Geospatial Information Systems from the United States Military Academy, West Point NY and a Professional Masters in Technology UAS (expected 2019) from Kansas State University.

Dr. Starkey is a Professor and currently serves as the CEO and Dean for the Kansas State University Polytechnic Campus.  As Dean, she oversees the College of Technology and Aviation academic programs and campus research centers.  Dr. Starkey holds an A.A. in Social Work from Colby Community College, a B.S. in Psychology from Fort Hays State University, a M.L.S. from University of North Texas, and a Ph.D. in Curriculum and Instruction from Kansas State University.  Joining Kansas State Polytechnic in June 2002 as a technical services/automation coordinator and assistant professor, Starkey was promoted to library director and associate professor in 2007, and to assistant dean of continuous improvement and distance education in 2010. She was named associate dean of academics and promoted to full professor in 2014. She gained the additional duties of interim CEO and Dean in June 2018 and continues in that capacity today. 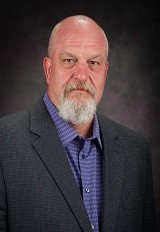 Mr. Anderson has more than 30 years experience in military, industry and academia.  He currently serves as Development Director for Kansas State University within the Office of Research Development (ORD).  Prior to joining KSU, he served as a Technical Director, Innovation Evangelist, and Senior Subject Matter Expert for ManTech International in support of HQMC Intelligence Department and its Tactical Exploitation of National Capabilities (TENCAP) office and Technology and Innovation Directorate; and as the Director for Mosaic ATM, Inc.’s Autonomous Systems Group. Between 1984-2010, he served in the United States Marine Corps where he rose in rank from Private to Colonel. During his career, he served as an (0231) intelligence analyst while enlisted where he was meritoriously promoted to Corporal, and as an officer he held military occupational designations as an (0202) Marine Air Ground Task Force Intelligence Officer, (0240) Imagery Officer, (0540) Space Operations Officer, and (8058) Acquisition Professional earning DAIWIA Level III Certification as Program Manager and member of the acquisition community while PM-Marine Intelligence Systems for the Marine Corps Systems Command.  He held command positions as a Surveillance and Target Acquisition Platoon Commander, Commander of the 2nd Force Imagery Interpretation Unit (FIIU) and was Commanding Officer Company E. Marine Security Guard Battalion (Department of State).  He served as the Marine Corps Senior Departmental Requirements Officer (DRO) and as the Imagery and Collections Section Head while serving with the Marine Corps Intelligence Activity; as the Branch Head for HQMC Intelligence Departments Imagery and Geo-spatial Plans and Policy Branch, and concluded his career as a Strategic Intelligence Planner for the Office of the Under Secretary of Defense for Intelligence (OUSD-I) and as the Chief of Staff for Secretary Gates Intelligence, Surveillance and Reconnaissance Task Force (ISRTF).  He has served at every operational level of the Marine Corps from Battalion, Regiment, Division, Wing, MEU and MEF; within the Marine Corps supporting establishment, HQMC and on the OUSD-I staff.  Mr. Anderson has spent a career supporting efforts to address the complexities of the intelligence community and inter-agency information management, decision making, talent acquisition, educational and operational environments.