Upon completion of this chapter, students should be able to:

The Belt and Road Initiative (BRI) was launch as part of the Constitution of the People’s Republic of China in 2013. Partnerships among China and other countries continue increase by engaging through economic and diplomatic means. The target completion date for BRI is 2049, the anniversary of the founding of People’s Republic of China. For lower income countries, the enticement of low-interest loans and support to build infrastructure is part of the attraction to a relationship with China. Current events of Brexit and a spilt United States political infrastructure have played into China’s goal of becoming a global superpower. As the U.K. and the U.S. appear to be in consistent conflict with itself and other nations, China’s façade to help countries through loans, technology, infrastructure without personal gain grows. Partnerships with the European Union, Middle East, Africa, Russia, Latin America and Asia fall into the different BRI initiative categories of Economic, Maritime, or Digital. The relationships formed by China have put the country as the world’s largest shipping nation. China is second in the world for economy and ranks and third in the world’s military powers (Tybring-Gjedde, 2020).

As of March 2020, 138 countries and 30 international organizations are part of BRI, covering the following regions: (Figure 12.1)

A complete country listing, region, and income status can be found in Appendix A. 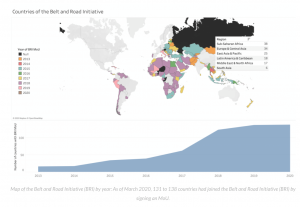 Figure 12.1 Countries of Belt and Road Initiative as of March 2020

The BRI has the remained strong with the following five goals:

The BRI “people to people bonds” has created a network of think tanks, media agreements, and establishment in communities and universities (Hamilton & Ohlberg, 2020). The spread of propaganda using these bonds, delivers a powerful message of international trust within a global community, making the BRI appear attractive and peaceful. With the addition of Italy and Switzerland in 2020, reinforces BRI commitment and credibility. Along with BRI, China has evolved to modernize their military defense and establish themselves as an international arms dealer. 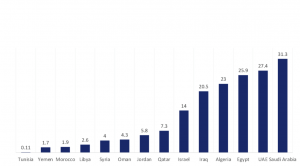 The BRI is critical for China in the Middle East; the gulf region is a global player for trade and finance. The Middle East’s partnership will give China advantages in trade, military operations, and infrastructure. Drones in this region have grown from surveillance to Unmanned Combat Air Vehicles (UCAVs). The U.S. has strict polices against the export of these deadly attack weapons.  In a ten-year period, China has sold 163 UCAVs verses the sale of 15 Reaper drones during the same time period (Roblin, 2020). The largest producer of UCAVs, China Aerospace Science and Technology Corporation (CASC), has plans to open a factory in Saudi Arabia. Egypt and Saudi Arabia are given priority by China for UCAVs, which are 75% cheaper than MQ-9 Reaper (Alden, Fiala, Krol, & Whittle, 2020).

Chengdu Aircraft Industry Group has taken advantage of China’s freedom to sell to anyone, not restricted by export policies. Wing Loong I and Wing Loong II are popular UAV models sold to the United Arab Emirates and Saudi Arabia.  The Wing Loong series of UAV are similar to the GA-ASI Predator. Saudi Arabia has acquired an estimated 300 UAV’s from China (Stevenson, 2019). China is in close competition with Turkey for supplying UAV’s to the Middle East. December 2019, Rainbow (CH-5) drones were exported to Pakistan, Egypt, UAE, and Saudi Arabia. (Figure 12.3)

In the Middle East, China invests in the energy, infrastructure, nuclear power, agriculture and finance to strengthen the ties to the Middle East (Chaziza, 2020). China would bring to Iran telecommunications (5G), banking, ports and railways to the region. China’s partnership with Iran could pose detrimental to the U.S. Military. China and Iran would agree to joint military operations, training, weapons development and intelligence sharing.  This would give China a military advantage over the U.S. and Iran global ally. 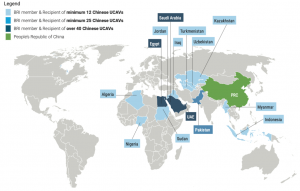 The build out of China – EU partnerships began in 2013 with the recruitment of the former Swedish ambassador to an advisor position with Huawei. Eventually, other members of the EU were recruited to be advisors for Huawei. With the growth of the Huawei relationships enabled China to build trust and obtained signatures of support for the BRI from EU member states. The governing body of the EU does not have a formal agreement with China regarding BRI. However, about half EU member states signed on to the BRI (Hamilton & Ohlberg, 2020). China has not sealed commitments for BRI from the top European economies (France, U.K. and Germany). Other EU member states have begun participating in the BRI through financial, corporate, and educational sectors. In July 2020, Serbia received their first order of Six Chinese-built CH-92A combat drones. This marks the beginning of China supplying drones to Europe, another step-in building ties in the region. 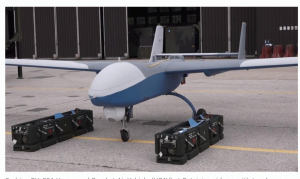 As part of the Made in China 2025 plan, Aviation and Aerospace Equipment is considered a priority sector. In some reports referred to as the “Air Silk Road”.

Tracing back to 12th century BC, the East China Sea Routes connect mainland China to Northeast Asia. The Liaodong Peninsula located in this region of Asia holds critical military value, dating back the Sino-Japanese War (Japan Center for Asian Historical Records, 2020). The peninsula’s trade route value, natural resources, and military positioning makes it a cornerstone for this route of Maritime Silk Road (MSR). The South China Sea route is critical for MSR, opening China to the continent of Africa, following the maritime routes through the Persian Gulf, Indian Ocean, and Red Sea. China has 32,000 kilometers of coastline and more than 3 million square kilometers of maritime land, making the country a real maritime power, according to the China Engineering Academician of the Chinese Academy of Sciences.

UAE is a leader in supporting China with the Maritime Silk Road (MSR). The creation of Khalifa Port’s CSP Abu Dhabi Terminal, by UAE and China shipping giants has attracted twenty additional Chinese companies to the area (Calabrese, 2020). This is the first phase of MSR for Abu Dubai. Turkey is the only country in the region not favorable to MSR.

In addition to the support of countries along the MSR, China is building an underground network for military communication and expanding sensors to create a “World Ocean” (Asia Maritime Transparency Initiative, 2020). The Blue Ocean Information Network, is part of MSR, will accomplish the following for China:

The Blue Ocean Information Network is based on Skynet and Submarine Net according to the PLA. China will have the ability to detect mineral, biological resources. With the information network China will have advanced unmanned cyber methods to control and protect the BRI. The Blue Ocean Information network combined with the increase of partnerships / locations along BRI will accelerate China as a maritime superpower. 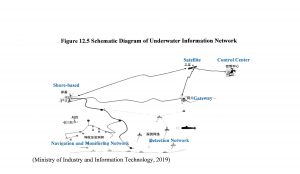 (Ministry of Industry and Information Technology, 2019)

Floating Integrated Information Platforms (FIIP) (also called Ocean E-Stations are the most visible piece of the Blue Ocean Information Network. The network is currently deployed between the Hainan Island and Paracel Islands, and the Bombay Reef. It is believed a previously identified one of the was deployed to Bombay Reef in the Paracel Island sometime in 2018. Communications capabilities of the FIPP include a Ku-band satellite antenna, an L-band satellite antenna, radio antenna, and cellular communications antenna. Sensing systems include an Automatic Dependent Surveillance Broadcast (ADS-B) antenna and an Automatic Identification System (AIS) antenna as well as a small air- and surface-search radar (Asia Maritime Transparency Initiative, 2020).

Left FIIP Between the Hainan Island and Paracel Islands (February 7, 2019)

Other components such as ocean buoys, fixed and relocatable underwater sensors to include sonar and hydrophones, unmanned aerial vehicles (UAVs), unmanned underwater vehicles (UUVs), and unmanned surface vehicles (USVs) could be part of the Blue Ocean Information Network (Asia Maritime Transparency Initiative, 2020). Revisiting the first edition of this textbook, Unmanned Aircraft Systems (UAS) in the Cyber Domain: Protecting USA’s Advanced Air Assets, Chapter 16 Chinese Drones in Spratly Islands and Chinese Threats to USA forces in the Pacific, the case for cyber weapon spoofing of legacy GPS signals affecting the US Navy and commercial vessels in Pacific Ocean are relevant to the Ocean E-Station that was placed in 2018 Bombay Reef in the Paracel Island. The FIIP communications functionality includes AIS, which could be allow for spoofing of AIS sending a fake collision alert by Closet Point of Approach (CPA) spoofing and negating the true alert transmitting to the vessel.

China’s goal to complete the development of the “Belt and Road” sea network cooperation to meet the military and civilian management by 2025. China’s researchers state there is an urgent need for information acquisition in the jurisdictional sea area (Ministry of Industry and Information Technology, 2019). China Telcom will use the maritime information nodes, network and submarine network to construct ideas and continue to strengthen the Blue Ocean Information Network.

Digital Silk Road (DSR) initiative was introduced by China in 2015. DSR has more of a government push using Chinese commercial company channels. The idea to grow DSR through several vectors such as social media, telecom, fintech, etc. Ideally, China wants the homegrown companies to fit in with their specific industry, to become a trusted member and contributor to their specific sector. This would give China the ability to intertwine DSR within the different tech vectors. China uses to their advantage of taking lead in specific technology to gain members for DSR, for example next generation (5G). They have used mobile technologies and fiber optic infrastructure to entice countries to the DSR with internet/telecom advantages (Greene & Triolo, 2020). China also promotes their payment system technology, digital wallets, two-way QR codes, paying via social media. 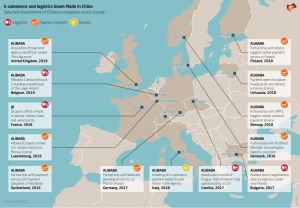 The fiber-optic members of the Digital Silk Road (DSR), Frankfurt to Mumbai via Azerbaijan added a new member November 2020. Turkmenistan agreed to link with Azerbaijan through cables in the Caspian Sea. It is suspected Iran is part of the DSR with cables running down the Persian Gulf.

The drone industry plays a critical part of DSR. SZ DJI Technology is a leader in the global consumer drone marketplace, therefore a large part of the technology vector. DJI has been accused of sharing user information and having week cybersecurity practices. Banned by the U.S. Military, DJI is attempting to create a DoD version of their product. If DJI is successful reaching DoD level of security, it could allow DJI access to a broader marketplace.

China’s Brick and Road Initiative has covered several sectors. In the context of unmanned, China has a significant role in the Middle East, Asia, and Africa military drone marketplace. They are beginning to capture the attention buyers from the Europe Union. China’s strong relationships across all vectors in the Middle East has led to a maritime advantage for trade and military operations. Extensive ties between China and Iran has created an unlikely partnership for the U.S. and allies. China has expanded technology under water that will lead to control of several regions if maritime partnerships continue to grow. The Digital Silk Road is an immediate cause for concern for Europe and the U.S., as consumers and industry become dependent on products produced by Chinese companies. The BRI continues to grow at an accelerated rate as trusted partnerships across all industries continue crossover into other opportunities.

Harding, R. (2020, September 20). China’s Belt and Road Initiative and the Impact on the Middle East and North Africa . Retrieved from International Banker: https://internationalbanker.com/finance/chinas-belt-and-road-initiative-and-its-impact-on-the-middle-east-and-north-africa/