War between belligerents whose relative military power differs significantly, or whose strategy or tactics differ significantly. This is typically a war between a standing, professional army and an insurgency or resistance movement militias who often have status of unlawful combatants.

Asymmetric warfare can describe a conflict in which the resources of two belligerents differ in essence and, in the struggle, interact and attempt to exploit each other’s characteristic weaknesses. Such struggles often involve strategies and tactics of unconventional warfare, the weaker combatants attempting to use strategy to offset deficiencies in quantity or quality of their forces and equipment. (Thomas, 2010) Such strategies may not necessarily be militarized. (Stepanova, 2016) This is in contrast to symmetric warfare, where two powers have comparable military power and resources and rely on tactics that are similar overall, differing only in details and execution. (Thomas, 2010)

This chapter was written to expose the reader to current and envisioned autonomous maritime technologies under development. The likes of which could potentially be used in non-standard or asymmetric methods. With the unspoken goal of possibly subvert or attack US naval forces and the Department of Homeland Security.

The US Navy remains arguably the most powerful naval force in the world. With the ability to project global power and reach while influencing US foreign policy by its mere presence, potential state and non-state adversaries continually seek ways to mitigate, undermine or even attack US naval forces that pose a threat to their regional interests. Cost effective autonomous underwater vehicles have been identified by adversarial military and domestic criminal organizations as a means to cheaply subvert US naval capabilities and prowess.

Until relatively recently, AUVs have been used for a limited number of tasks dictated by the limited technology available. With the development of more advanced processing capabilities and high yield power supplies, AUVs are now being used for more dynamic applications / tasks with current roles and missions constantly evolving.

Submarines that travel autonomously to a destination by means of GPS navigation have been made and are currently in use by illegal drug traffickers. This would limit the need for “go fast” boat operators reducing overall cost, electromagnetic signature and risk to personnel. Recent semi-submersible seizures by the US Coast Guard in the Gulf of Mexico may be prompting criminal organizations to shift to autonomous operations.

Autonomous underwater vehicles, for example AUV ABYSS, have been used to find wreckages of missing airplanes, e.g. Air France Flight 447, and the Bluefin-21 AUV was used in the search for Malaysia Airlines Flight 370. (Mason, 2014) Developing technologies may soon provide a long endurance persistent presence throughout vast swaths of open ocean that could be used to detect downed aircraft or sinking / sunk surface / subsurface vessels.

In addition to the list of standard UUV’s, the underwater glider (UG) is a type of autonomous underwater vehicle that uses small changes in its buoyancy to move up and down and uses wings to convert the vertical motion to horizontal, propelling itself forward with very low power consumption.  (See Figure 5.1)

In 2004, the US Navy’s Office of Naval Research began developing large gliders that were designed to quietly track diesel electric submarines in littoral waters, remaining on station for up to six months. (XRay) 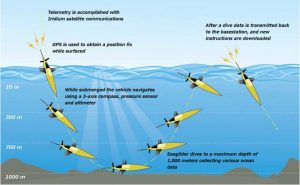 Gliders are currently being used by NOAA to track oceanic data to help with hurricane forecasting. NOAA hopes the data collected from these gliders will help enhance our understanding of air-sea interaction processes during hurricane force wind events. In 2020 a network of hurricane underwater gliders was implemented to assess the impact hurricane force winds on upper ocean density structure, and assess the impact of ocean profile data from underwater gliders in operational intensity forecasts. (XRay)

Gliders remain a simple way to establish a persistent networks of sensors at low cost that could potentially carry payloads for various mission sets. They could then be used for tracking potential adversarial threats, while presenting multiple dilemmas the enemy would have to respond to at a very low cost compared to manned vessels that only have a fractional durational use. As sea glider technology continues to mature, communication and electromagnetic signature reductions for these suites will have to be taken into consideration in order to maintain a low observable persistent presence. Figure 5.2 shows how sea gliders can be deployed in formations to create a network of arrayed sensors. 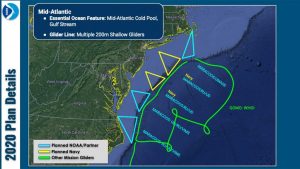 The US Navy is currently working to develop an advanced electronic warfare program that uses drone swarms in the air and sea to cooperatively fool a wide variety of sensors dispersed over a large area. Known as “Netted Emulation of Multi-Element Signature against integrated Sensors” or NEMESIS.

The Navy has spent the last several years developing and integrating multiple types of unmanned vehicles, shipboard and submarine systems, countermeasures, electronic warfare payloads, and communication technologies to give if the ability to give it the ability to project what is, in essence, phantom fleets of aircraft, ships and submarines. These realistic-looking false signatures and decoys have the ability to appear seamlessly across disparate and geographically separated enemy sensors systems located both above and below the ocean’s surface. As a result, this networked and cooperative electronic warfare concept brings an unprecedented level of guileful fidelity to a fight. It’s not just about disrupting the enemy’s capabilities or confusing them at a command and control level, but also making their sensors tell them the same falsehoods across large swathes of the battle space. (Tingley, 2020)

The name is a play on the Internet of Things and the aim is to achieve persistent maritime situational awareness over large ocean areas. While satellites can provide some information, DARPA project manager John Waterson points out that there are gaps in their coverage – optical satellites cannot see through clouds, radar satellites only have limited coverage, and none of them can say much about what is going on underwater. (Hambling, 2020) 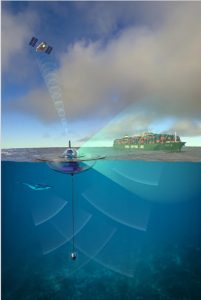 Ocean of Things concept of operations, as the float senses activity on and under the water and passes back details via satellite – DARPA image.

Floating sensors, known as floats, can gather far more detailed information, and can remain at sea for months at a time. There is a network of almost 4,000 Argo science floats around the world, gathering data on ocean temperature and salinity. Waterson wants to see much larger arrays of low-cost floats with more sensors, floats which would carry out missions lasting up to a year before scuttling themselves and degrading. The floats are environmentally friendly, avoiding the use of toxic materials. (Hambling, 2020)

The cellphone industry has developed plenty of affordable, miniature sensors, and the OoT is leveraging this technology. The new contract was awarded at the end of July to technology company PARC, whose 18-kilo, solar-powered glass float design won out ahead of two others in the first phase. The floats are sensor nodes which will pass data via satellite to a cloud network for real-time analysis. The OoT will combine data from multiple floats, seeing the whole picture rather than the single pixel gathered by one sensor. (See. Figure 5.4)

Figure 5.4. The eighteen-kilo float houses a variety of sensors and operates for up to a year on solar power 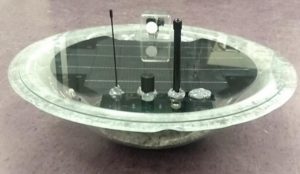 A key element of the OoT is its hydrophone, a sensitive underwater microphone or passive sonar which can pick up engines, screws and other sounds from ships and submarines. Floating sonobuoys dropped from aircraft have been used to locate submarines since WWII, but these only operate for a few hours. The OoT hydrophone has to operate for a whole year – and it has to be affordable. In 2019, researchers from Scripps Institution of Oceanography made a prototype high-fidelity hydrophone for the OoT which they estimated could be mass produced for $100-$150. (Hambling, 2020)

DARPA plans to carry out tests with thousand-float arrays in the Southern California Bight and Gulf of Mexico later this year. Initially they will be arranged at about one float per three square kilometers. Waterson believes separation can be increased to one float per twenty square kilometers while maintaining coverage. He is also talking about much bigger arrays in future, of tens of thousands of floats. (Hambling, 2020)

In addition to obvious military and border protection use – no vessel could slip through the dense field of OoT sensors, on or under the water – the OoT will produce a mass of data of interest to oceanographers, meteorologists and biologists, with plans to share raw data online with researchers. The OoT may be able to monitor marine mammal like whales, watch hurricanes form from the inside, and track changes in ocean temperature. (Hambling, 2020)

In this context, Waterson says that people often mention Flight MH370, the Malaysia Airlines Boeing 777 that disappeared in Southern Indian Ocean in 2014. If there had been an OoT in the area, a plane crash could have been detected and the crash site located. However, DARPA’s main interest is likely to be in military applications. (Hambling, 2020)

“The persistent coverage provided by dispersed sensors provides round-the-clock coverage that other sources of data like an MPA [maritime patrol aircraft] or a SAR [synthetic aperture radar] satellite, which cover a given area for a certain amount of time before moving on, cannot,” says Dr​. Sidharth Kaushal, an expert on sea power at the U.K. defense think tank RUSI. (Hambling, 2020)

Kaushal notes that as well as directly observing vessels and aircraft, the OoT will be able to measure variables like temperature, ocean salinity and ambient underwater noise, which are important for calibrating sonar during anti-submarine operations. The OoT will not be limited to any specific role; the variety of sensors, coupled with powerful data-processing techniques, mean it might be reconfigured to deal with emerging threats. For example, OoT might form a defensive picket to detect, track and locate incoming Russian Poseidon nuclear torpedoes so they could be intercepted. (Hambling, 2020)

“This fits into a wider concept of Mosaic Warfare creating a system the components of which can reform and interact in multiple ways rather than relying on a hierarchical system,” says Kaushal. (Hambling, 2020)

In some ways the OoT parallels the network of surveillance platforms China is building in the South China Sea, which are also gathering scientific and military data. However China’s Blue Ocean sensors are tethered in place and appear to be mainly for radar and optical observation; there are believed to be hydrophone arrays on the sea bed. By contrast the OoT is much smaller and expendable, and could be deployed anywhere that the U.S. requires detailed, persistent observation of maritime activity, thousands of floating eyes to see over, on and under the sea. (Hambling, 2020)

Autonomous underwater vehicle applications continue to grow and expand as fast as emerging maritime technology allows.  While the United States maintains naval supremacy throughout the world and the Department of Homeland Security continues to grow and develop, potential adversarial and criminal entities will seek ways to subvert and penetrate and exploit known and unknown weaknesses. This could be done by overt air and sea attacks against maritime vessels and infrastructure or most likely by low profile, low signature and low cost autonomous systems. These autonomous systems will be used to track surface and subsurface vessels, providing potential adversaries a clear picture of how US naval forces are arrayed. They will also be used to covertly strike by means of delivering small payloads to specific targets while remaining undetected.

As other advancing nations continue to conduct similar research as DARPA, NOAA and the Office of Naval Research, the growth of autonomous under water vehicles will remain constant for the foreseeable future. The next new wave of technological advances will be centered on how to effectively counter these AUV / UUV systems before they can be effectively employed against US naval and maritime assets across the world’s oceans.

Tingley, B. (2020, August 18). The Navy’s Secretive and Revolutionary Program to Project False Fleets From Drone Swarms. Retrieved from thedrove.com/: https://thedrove.com/the-war-zone29505/the-navys-secretive-nemesis-electronic-warfare-capability-will-change-naval-combat-forever